THE ART OF FATED: BEGINNINGS

Hello, my name is Marianne Martin, Art Director on FATED.

I was thrilled when I learned we were going to work on a VR project – and Norse-themed at that! Like many, I wondered if virtual reality was a fad until I tried a few different demos and realized the fantastic potential for immersion. Here was an opportunity to build the most tangible game world ever! With VR able to fool our brains into the truest feeling of presence yet (to the point of vertigo!), visual development is entering a new age. 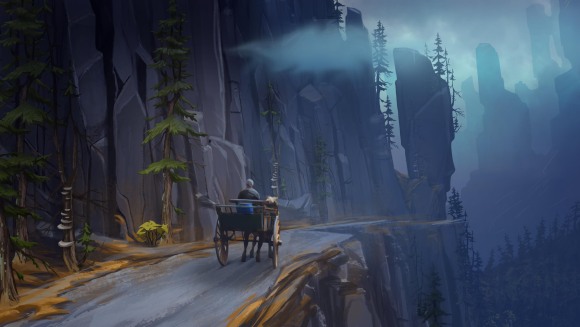 During the initial concept phases, we were all excited about the epic narrative. This was VR: our Midgard and our characters had to be so… real! Character bios in hand, I started sketching detailed, documented designs. When concept artist Marie-Hélène Morin-Fafard joined the project, she drew some spectacular, moody environments that we hoped would be the perfect grounds on which to stage the FATED adventure. We did what pre-production is intended for: we went big.

When we started getting more specs and technical info, we realized our strategy wasn’t quite right. With the unexpected technical limitations and a small team, we needed to change our academic, too-realistic approach. I took a step back and toyed with the idea of exploiting the limitations as if they were fully intended, rather than produce something that couldn’t be simulated believably on our platform.

The games and animated movies that made a lasting impression on me are not impaired by stylization – they are probably better for being stylized. I thought: if we stylize FATED, focus on expression, create a meaningful color script, and give it distinctive visuals to enhance the experience that makes VR so special, we’ll have something extremely solid. We can make the player believe they are an emotionally and physically-involved part of that universe, and this became our focus.

So, back to basics we went, designing simpler characters and environments with more striking and memorable silhouettes. We got our 3D pipeline into gear to achieve the vision, and our technical artist, Étienne Carrier, developed clever systems to fully exploit our visuals and create environment variety in Unreal. Before long, we had a successful test scene, a new sense of wonder, and a few of the building blocks for the world of FATED.

We’re not out of the woods yet, so stay tuned…

Be the first to start the conversation!